I am in great pain.

The weekend was good. Friday evening was spent at Sharif’s place- he made dinner and margaritas and we watched about four hours of Battlestar Gallactica. We’ve only just finished the second disk of the first season. But seeing as we’ve been watching them a DVD at a time, I don’t think it will be particularly long before we are ready to move on to the next set.

Saturday was the snowy day. Of course, that means that that was the day in which there were plans. I did manage to get to the mall in the morning- it was just barely snowing at that point, so it wasn’t difficult. I spent about an hour there with Erica, having Panera brunch and shopping for a dress for her. In the afternoon, as the snow was getting more serious, I met up with Sharif and we headed to my parents’ house to celebrate my mom’s birthday. I gave her a book about day trips in the MidAtlantic states, and a CD of the Reduced Shakespeare Company. We all went to dinner at Carrabbas (that reminds me, my chicken parmesan is still in the fridge at Sharif’s house. Blast!), then returned to the house and watched Galaxy Quest. Sharif and I snagged the old plastic sled of my childhood, and took it with us. The drive home was not too awful, but I’m glad we didn’t wait any longer to leave.

We parked at Sharif’s place, stopped in there so that he could change clothes, then walked to my house so that I could do the same. We walked in the snow- much more pleasant than driving- found a hill, and slid down it for a while. We tested the snowball quality, and made a tiny, featureless snowman. It was great fun. And afterwards there was hot chocolate and drifting off on the couch. All very much the way a snowy night should be spent.

Of course, Sunday was when we had to face reality. Sharif came by to help shovel off my steps and sidewalk. That didn’t take very long, but then I accompanied him to his house to face the far-more-sizable task of digging out his house. He lives on a corner, with an alley/driveway leading to the garage where his car was parked. We dug. And dug. And dug. We did a good job, but it took a very long time. And we were exhausted at the end of it. I didn’t even feel like bothering with the relatively short trip home, so just stuck around his house for the rest of the day- showering and cleaning up his kitchen and eventually napping on the couch while Rob and Heather were over for a band practice. That was fun. It’s not often that my domestic endeavors are accompanied by live music.

Because of the physical exertion of all that shoveling (did I mention that it was A LOT of shoveling), I slept amazingly deeply last night. But today my muscles are complaining. Erg. And I’m not looking forward to trying to park in my neighborhood this evening. The neighbors are pulling out the fun “This folding chair in this parking space means that it is mine!” maneuver. So, since I did the walking thing on Saturday rather than drive my car back from Sharif’s place in the storm, there is nowhere for me to park. The place I found last night was not really a space, but I’ll park there again if I have to. And if it’s available. 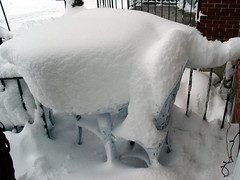 No Tea Party Today
Brought to you by Indiana Joanna.
I don't think I'll be having my morning tea out on the front porch anytime soon.
Collapse